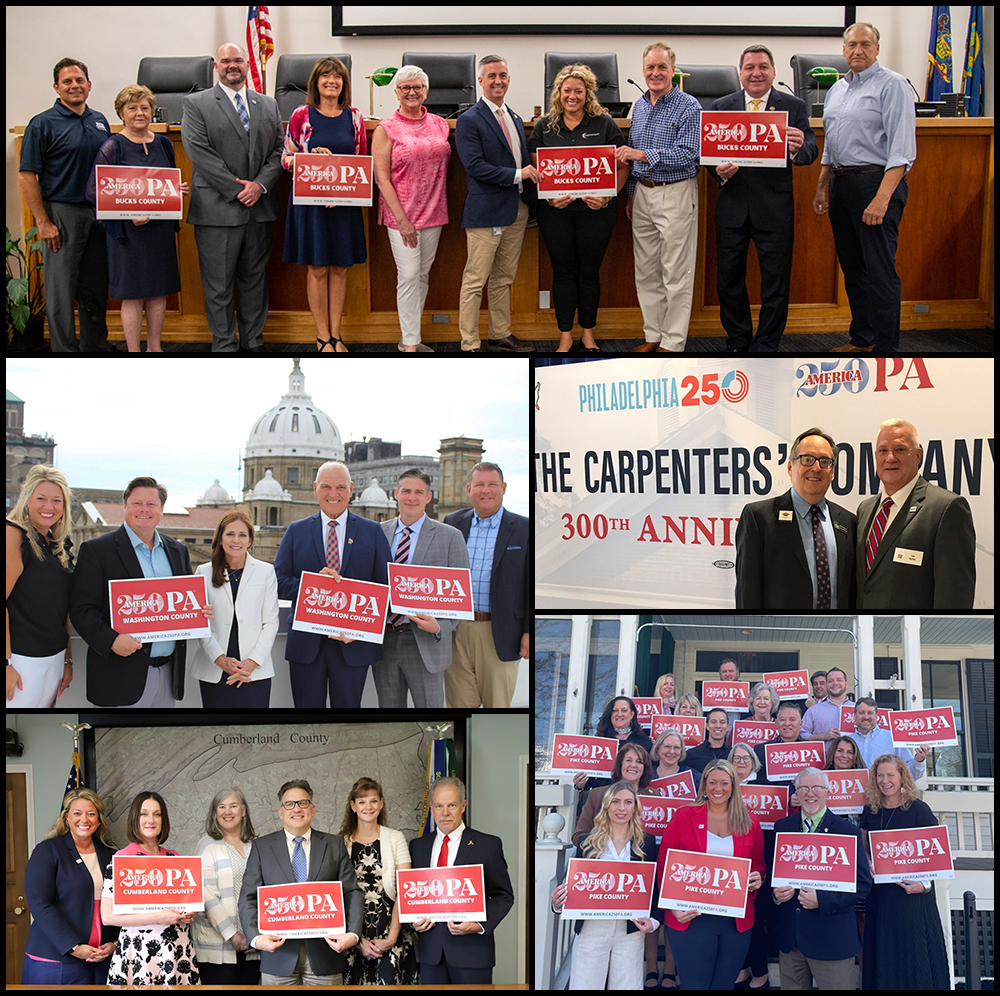 The Pennsylvania Commission for the United States Semiquincentennial (America250PA) was established by the legislature and Governor in 2018 to plan, encourage, develop and coordinate the commemoration of the 250th anniversary of the founding of the United States, Pennsylvania’s integral role in that event, and the impact of its people on the nation’s past, present, and future.

America250PA is made up of 24 voting Commissioners, who were appointed in a bipartisan manner by the Pennsylvania House and Senate, along with the Governor. In another show of bipartisanship, the previous 5 Pennsylvania Governors serve as honorary Co-Chairs for the Commission.

The duty of the Commission is to engage every Pennsylvanian in every county, as it strives to make the Semiquincentennial the largest and most inclusive commemoration in our Commonwealth’s history! To achieve this monumental goal, the Commission established both an Advisory and County Advisory Committee. The Advisory Committee is open to any Pennsylvanian, who wishes to share their expertise, by serving on one of America250PA’s subcommittees. Anyone interested in serving may submit an application for consideration. On the other hand, County Advisory Committee members are appointed at the discretion of the county’s governing entity.

At its full complement, the Commission will have one representative from each county serving on its County Advisory Committee. These representatives serve as liaisons between their respective counties and America250PA. In addition to making an appointment, counties are encouraged to pass the America250PA resolution. Doing so, would make the county an official partner of America250PA! Dozens of counties have also opted to create a county commission to assist America250PA with implementing programs, projects and events in their county, along with coordinating local Semiquincentennial efforts.

The wave of county engagement has prompted municipalities, and even school districts, to want to get involved as well. Thus far, 40 counties and over 250 municipalities have adopted the America250PA resolution.

Pennsylvania nonprofit organizations can participate by becoming an America250PA Nonprofit Affiliate. The affiliate program was created to help America250PA identify nonprofits that wish to
participate in programming and other initiatives leading up to, and throughout 2026. The goal is to have partner organizations in each of the 67 counties, ensuring that every interested group has the opportunity to share their ideas and promote their organizations through a one-time enrollment fee of $250. To date, the Commission has partnered with 85 nonprofit organizations, representing 25 counties.

To learn more about America250PA’s efforts or find ways to get involved, please visit: www.America250PA.org.

We hope you will #JoinUs and #BecomeAPartofHistory!