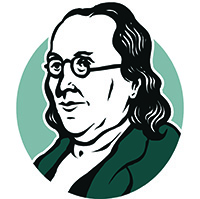 The Pennsylvania NewsMedia Association is now accepting nominations for the 2023 Benjamin Franklin Award for Excellence.

Purpose of the Award

The criteria for this award is flexible to accommodate a wide range of circumstances and situations. Some examples would include:

The work for which the candidate is being nominated should be current within the past one to two years.

Nominations must be received no later than Friday, June 2, 2023.

Award will be presented at the 2022 PNA Annual Dinner.