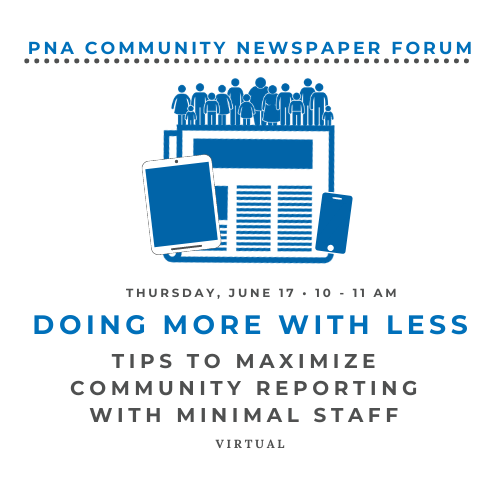 Community newspapers have big shoes to fill. Surveys show that they connect with readers by providing the news they need and are regarded as highly valuable and vital local information sources.

It can often be a challenge for small newsrooms to produce and maintain a wealth of local content; however, it can be done. During this session, editorial experts from the Society of Professional Journalists will provide practical information on best practices, skills and innovations to increase your efficiency.

Pat has a bachelor’s degree in Journalism and Humanities and a master’s degree in Communication Studies. She has been a member of Society of Professional Journalists since 1993, serving as President of the Keystone chapter for more than 10 years and acts as contest coordinator for several years.

Jim Dino’s tenure at the Standard-Speaker spans three decades. He has survived lay-offs and buyouts and he continued to pick up assignments whenever and wherever he was needed. He knew his community and his audience, and he never wanted them to not know what was going on around them.

Jim Dino has defined what local news is and covered everything from Fireman’s bazaars, business openings and the police beat to sports and school boards. He has met four governors, NASCAR drivers, country music stars and pop singers. He has been called the Dino dictionary because of his amazing memory for names, dates, and phone numbers. In addition to his 38 years at The Hazleton Standard-Speaker, Jim was also a radio announcer in college and afterward.

Jim recently retired in March and has stayed actively involved in community events as a volunteer.

His mantra for being a journalist has been: “I always gave people the benefit of the doubt and told both sides of the story and let the reader decide.”

Mark Segal is an American journalist. He is the founder and publisher of Philadelphia Gay News and has won numerous journalism awards for his column “Mark My Words,” including best column by The National Newspaper Association, Suburban Newspaper Association and The Society of Professional Journalists.

The publication was founded in 1976 by Mark who was inspired by activist Frank Kameny when they met in 1970. PGN is the oldest LGBT publication founded as a weekly in the United States and is the largest on the East Coast with 25,000 weekly readers.

In winning his most recent first place away from the Society of Professional Journalists Keystone Chapter’s Excellence in Journalism contest in column writing Mark said: “We are humbled by the recognition, and we promise our community and journalist peers that we will continue our passion and hope that our journalism will help bring about change.”

Pete has served as the editor in chief of the Press-Enterprise in Bloomsburg since March 2020. Before that, he served as the managing editor of the paper since 2015, where he managed a staff of reporters, coordinated with staff photographers, and determined story placement for the daily paper.

Prior to becoming a managing editor, Pete was a reporter covering the Town of Bloomsburg, Bloomsburg University and breaking news.

Like many in the field, he’s seen staff sizes shrink during his two decades in journalism and has tried to manage that decline.

“You can’t do more with less, but if you have a dedicated crew of reporters and photographers, you can still put out a good news product with a smaller staff by being intentional about how you spend your resources, and by reviewing long-held assumptions about what readers want to see if they still hold up.”