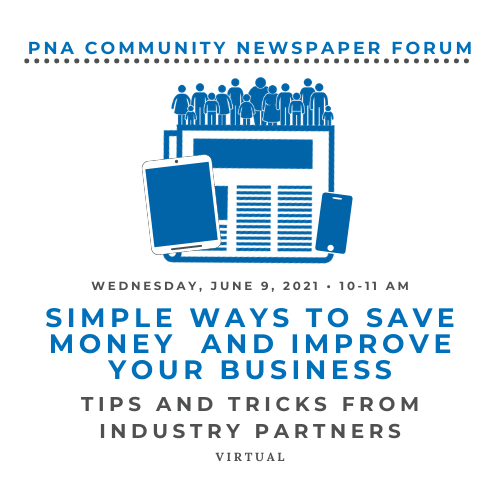 Keeping cash in your pocket may be easier than you think. Hear from a panel of representatives from crucial infrastructure partners, who will share details on how your organization can improve its business model, find new money-saving options and streamline the organization to improve overall workflow.

Michael Shapiro is Founder and CEO of TAPinto, a network of more than 90 franchised online local news sites in the United States.  He is a “Voices” columnist for Editor & Publisher Magazine, writing extensively on digital media and marketing and local news.  Shapiro is a graduate of Rutgers University and Stanford Law School.

Michael Rogin has been in Telecommunications for over 40 years. His first position was as an Associate Account Executive for Bell of Pennsylvania in 1979.

AT&T was the primary provider of telephone systems and local/long distance services. Data Communication was at its infancy. Other phone manufacturers were minor players. With the advent of divestiture (breakup of the Bell System) in 1983, the entire industry began a multiyear tumultuous transformation to where it is today. During that time, he worked in sales and marketing for over twenty-five different companies, many of which went bankrupt within the first two years of their existences. Their clients as well as their employees were left in a lurch. Rather than be a part of these companies going forward, he began consulting in 2009, working with companies with whom he had developed a relationship. Through networking, new clients were also obtained.

Consulting allows him to parlay his industry experience as well as follow trends and developing technologies.

As an agent for several vendors, we can function at no cost to our clients. Our offering is for the small to medium business marketplace that may need telecommunications consulting but lack the funds.

Michael Hochberger has been president of MESJ (pronounced “message”) Associates, a rapidly growing contract editorial, research and production team with staff members worldwide providing content to publications at an impressive cost savings. Prior to that, Michael held various positions culminating in VP at  American Lawyer Media, publishers of Law.com, American Lawyer Magazine and the New York Law Journal as well as the Pennsylvania Legal Intelligencer. In 1999, Michael initiated an offshore outsourcing initiative saving the company millions of dollars.

Michael was previously a VP at Richner Publications, a rapidly growing newspaper publisher on Long Island in suburban New York City and ran their commercial printing business and production of over 30 weeklies.

Mark Frizzell founded MyDistrict.Net 21 years ago and it is now the leading circulation software in the US. Mark started as a Distributor and worked into the tech side of managing Carriers/draws/route books. They now service over 120 of the leading publishers and is a member of National Newspaper Association as well as Pennsylvania NewsMedia Association.

Melvin T. Robinson began his career as a commercial collector for a national HVAC distributor in 2003. In 2009, he joined the largest Commercial Collection Agency in the US at the time as an entry level Sale Rep.  His prior experience was instrumental in his success as he was well aware of the challenges A/R management entailed. In less than 2 years he was promoted to a Working managerial position.  In this position he managed a book of clients between 80 and 100 clients, while simultaneously hiring, training, and managing new sales reps.

In late 2012 Mr. Robinson became the Corp office Training Manager.  In this position he oversaw all of the company’s training processes and supervised the local branch training managers. In 2014, he spearheaded the development of a Pre-collection division.

From 2014 to the present Mr. Robinson has worked with his current Agency to develop their association division building client relationships that have significantly lowered his clients overall collection related cost while increasing the recovery of outstanding accounts.