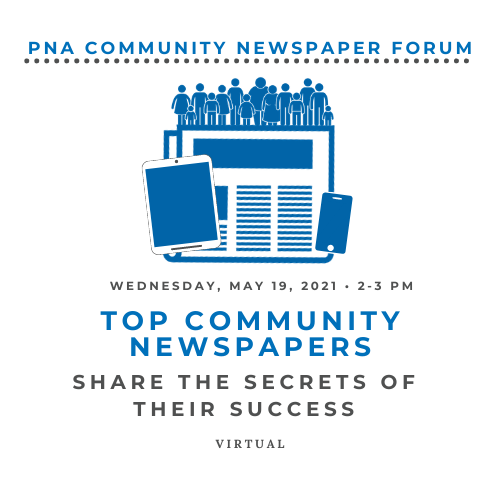 It is said that imitation is the sincerest form of flattery. Join us for an engaging panel discussion, moderated by Editor & Publisher‘s Nu Yang, as leaders from various community newspapers share the details of their most successful programs and initiatives from the past year. Bring a pad and pen and your questions to capture the facts so you can replicate these practical ideas at your news media organization.

The PNA Community Newspaper Forum is free of charge to PNA members.

Nu Yang is editor-in-chief of Editor and Publisher magazine, the authoritative journal of news publishing. Previously, she served as managing editor and associate editor. She has been with the publication since 2011. She is a former staff writer for the Allegan County News in Allegan, Michigan.

Eliza Gaines, a Little Rock native, is the fourth generation of her family to be in the newspaper industry. She is passionate about sharing the importance of news literacy and supporting local journalism.

Eliza attended the University of North Carolina at Chapel Hill where she earned her B.A. in English and later her M.A. in Mass Communication, where her focus was business and media.

Eliza is on the boards of the UNC Hussman School of Journalism and Media Foundation, the Southern Newspaper Publishers Association Foundation, the CHI St. Vincent Foundation, Our House and the Gladney Center for Adoption.

Eliza is married to Alec, an attorney, and they have three young children.

Kayla has been working in local news since 2009. Prior to coming to Sumter, South Carolina, she has worked at papers in Gainesville Florida; Tel Aviv, Israel; and Atlanta, Georgia. She is from Gainesville and also received her bachelor’s in journalism from the University of Florida. She has been awarded for her work in both Georgia and South Carolina and has been part of a team at The Item since 2017 that has been recognized nationally multiple times for its efforts to sustain local news. She and her husband, who is the chief digital officer at The Item, have a dog, Breeze, who, sans COVID, is the office’s unofficial chief morale officer.

Dan’s Taste are the premier food & drink events on the East End of Long Island. Mr. Schneps also founded and operates LIC Flea & Food Market, which is one of the top destinations in Queens, New York, as well as The World’s Fare, which annually attracts over 10,000 attendees to Citi Field for a two-day international food and beer festival.

The company’s founder, Publisher and President is Mr. Schneps’ mother and business partner Victoria Schneps-Yunis. Inspired by the power of the press during her advocacy work on behalf of her daughter with special needs, Ms. Schneps pursued her dream of being in the news business. She started in her Bayside living room, a neighborhood newspaper with a partner and a $250 investment.

Surrounded by the news business for almost his entire life Mr. Schneps developed an entrepreneurial spirit and passion for media at a young age. He graduated from Indiana University’s Kelley School of Business as a finance major. Mr. Schneps worked for Bank of America Securities LLC as an Investment Banking Analyst in the Media & Telecom group. After gaining invaluable knowledge he joined the family business in 2001.

Mr. Schneps currently serves on several boards and resides in Brooklyn with his wife Tracey, son Hudson and daughter Sloane.

Tom Shaw is Vice President of Shaw Media, and Chief Product Officer. J. Tom has over 20 years of local media experience in digital, print, radio, and television. He has a journalism degree from Colorado State University, and an MBA from University of Colorado at Denver.

Provocative thinking. Should you transition your community newspaper to a nonprofit model?

Diversify Your Revenue Stream by Creating a Digital Agency