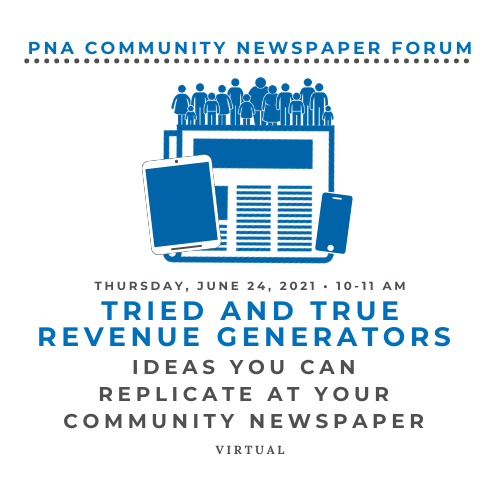 There is no reason to reinvent the wheel regarding identifying new revenue opportunities for your community newspaper. A panel of newspaper leaders will share the details about the successful initiatives they have launched at their publications. Ranging from contests and membership programs to merchandise, events and more, you will learn what it takes to get started on these exciting and profitable ideas.

Sherri Growden has been with the Bedford Gazette for 17 years, except for a short stint with the Pulitzer prize winning Emporia Gazette in Kansas.  Sherri started at the Bedford Gazette as an Advertising Executive, became Advertising Director and is now the Associate Publisher, but she still sells every single day!  Sherri is extremely proud of the Bedford Gazette winning PNA’s Sweepstakes Advertising Award for the last 3 years.  She is currently working on launching a coffee-table quality magazine celebrating the 250th Anniversary of Bedford County.

Jasmine M. Hughes currently serves as the Advertising Director at the Pittsburgh City Paper, but her media career started in 2006 at the Observer Publishing Company where she started as an Advertising Consultant and over the next eleven years held roles in advertising, marketing, digital advertising and eventually took over managing the revenue and special projects for the weekly, The Almanac during her last three years with the company. Before moving into the role at the City Paper, Jasmine spent three years at the Pittsburgh Post-Gazette where she managed different sales teams and helped oversee and launch special projects focused on new revenue opportunities and the growth of digital revenue.  Through Jasmine’s career, she has showed a passion and positive outlook on the media industry especially in the print and digital space.  She has served as President of the Interstate Advertising Manager’s Association and in 2019 was named one of Editor & Publisher’s 25 under 35.

Dawn Fisher resides with her husband Greg in Schuylkill County.  Dawn has two adult children who live in the Pottsville area, and two grandchildren.

Dawn has been with the Republican Herald for 16 years. Since January of 2019, she has held the position of the advertising director. Prior to 2019, she was an outside automotive advertising sales consultant for 12 years, as well as a proofreader/customer service representative when she first started her employment at the paper. Dawn is a four-time recipient of Time-Shamrocks Golden Shamrock Award and was awarded the 2017 News Media Sales Professional of the Year award which was awarded by the Interstate Advertising Managers Association.

Andrew Olsen is the publisher of Times Review Media Group in Mattituck, N.Y. He is the past president of the New York Press Association and a current member of its board of directors. During Andrew’s leadership of Times Review over the past two decades the company has won countless awards at both national and state levels. He is a past member of Vistage, a CEO peer group, and has been featured in Editor & Publisher and Forbes, and Times Review Media Group has been a case study for “Saving Community Journalism” through the University of North Carolina journalism school. Andrew is a member of the Rotary Club of Riverhead and Cutchogue Fire Department. He is a graduate of the University of Richmond. He is married to Sarah Olsen and has two children: Tyler, who attends The University of North Carolina at Chapel Hill, and Emma, who will attend UCLA.

● Advertising Director for the Observer-Reporter, Herald Standard, The Almanac and Greene County Messenger, Reimagine Main Street and the Event Marketing Division
● Prior to being promoted to Advertising Director, she was the Event Manager for the Observer Publishing Company and created numerous regional events, such as the Greater Pittsburgh Food Truck Festival, Corks and Kegs, the Washington County Auto Show, First Fridays in downtown Washington, the Holiday Market and All for Her
● Proud partner of Becca Carl, other mom to Christian Rohrer
● Advocate of being nice and drinking coffee
● Vice-President of the Leadership Washington County Board of Directors
● Junior Achievement Board of Directors member
● Bradford House Board of Directors member
● 2018 Athena Award Winner
● Southpointe CEO Association 2017 Emerging Leader Award Winner
● Prior to her career in the media, she had a 20 year career in mall management. She managed Washington Crown Center, the Galleria of Mt. Lebanon and the Waterfront
● Passionate about women’s rights, motivating people and doing the right thing
● We have one chance to make a difference. Make it count