The Senate and House are in legislative session this week.

Senate Republicans elected their leadership team for the 2021-2022 legislative session last week. The newly elected leadership team will begin serving in their roles on December 1, 2020. Watch their news conference.

Senator Kim Ward (R-39) will serve as Senate Majority Leader.  Her duties include overseeing the legislative agenda, developing policies and strategies for the Senate Republican Caucus, chairing the Senate Rules and Executive Nominations Committee and playing a key role in floor debates.  She will also have a major role in negotiating issues with the Administration and House of Representatives and in supervising action on the Senate floor.  She previously served as Majority Caucus Administrator and as the first female chair of the Senate Transportation Committee.

The Senate Democrats held their leadership election today and no changes were made. 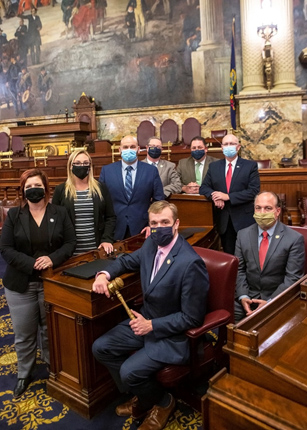 The legislature is expected to pass a $35.5 billion budget plan by the end of the week, which will fund the state from December 1st through June 30th. In May, Governor Tom Wolf signed the general appropriations budget, House Bill 2387, sponsored by House Appropriations Chairman, Rep. Stan Saylor (R-York), which funded the state through the first five months of Fiscal Year 2020-2021. The earlier plan of $25.8 billion used funding based off the current year’s numbers. Reduced state tax collections, now estimated at $32.1 billion, will be supplemented with a projected $2.1 billion in federal medical assistance reimbursements, $1.3 billion in remaining CARES Act funds held by the Wolf Administration, and $531 million in one-time transfers from cash reserves in a number of state government’s special funds.

Rep. Seth Grove (R-York) has been named as the interim chairman of the House State Government Committee, which will begin holding hearings on the process undertaken in the 2020 election. Yesterday, the Committee passed House Resolution 1100, which directs the Legislative Budget and Finance Committee to coordinate an audit of ballots canvassed in the 2020 general election. That resolution is up for a vote in the House today.