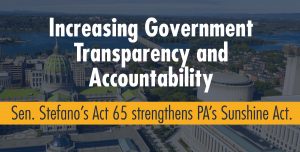 A bill amending the Sunshine Act, requiring that agendas be posted at least 24 hours prior to, and made available at, public meetings was signed into law by Gov. Wolf in June as Act 65. In addition, after the agenda has been finalized and posted, the agency may not take any official action on any item that is not listed on the notice, except in emergency situations or to consider insignificant matters. SB 554, introduced by Sen. Patrick Stefano (R-Fayette), passed unanimously in both chambers of the Legislature earlier this year. PNA supported the bill and worked with various stakeholders for several years to get this bill signed into law and signals a significant victory for open government in Pennsylvania. The Sunshine Act protects the public’s right to be informed and present at government proceedings.