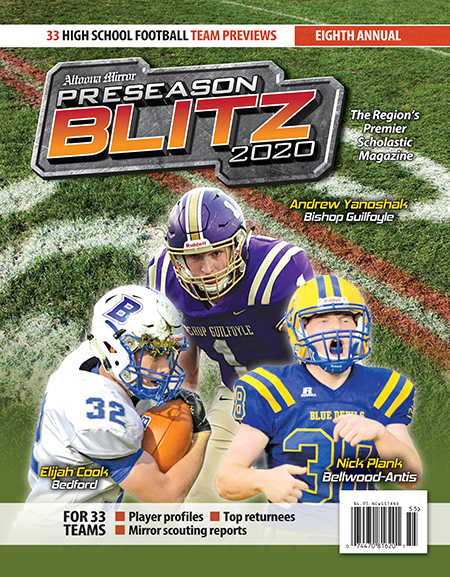 In 2012, the Altoona Mirror team decided to try something a little bit different when it came to a high school football preview.  “We had always done a season preview,” said Mike Boytim, high school beat writer and 15-year veteran reporter for the Mirror. “We wanted to give the kids a kind of ‘Sports Illustrated’ experience.” The result of the team’s brainstorming and subsequent work is a now 162-page glossy magazine, Preseason Blitz, which features local athletes and their teams in preparation for the school sports season ahead.  Now in its eighth year, the magazine remains a team effort for the Mirror with sports editor Buck Frank overseeing the layout and coordination and Boytim and 38-year senior reporter John Hartsock providing the content.

Each team included in the magazine has an impressive section of its own that includes a player profile of a senior member, most often the MVP of the team, as well as a spotlight article about the team that includes notes about the coach.  The team’s previous year statistics and current roster are included in the section.  The magazine also covers six conferences outside of the region with small blurbs on those teams. Boytim notes the extensive planning that goes into the spotlight articles in Blitz: “John starts working on the profile articles in February. We do this in addition to the daily section, so we start working on it pretty early, and whenever we can.” Boytim said that the finished product is wrapped around July 1 and lands on the newsstands by the end of that month. The newsstand price is $4.95 and the Mirror offers online purchases and shipping options as well.

In its inception the magazine covered 24 local schools and respective teams, growing now to 33 schools included with feature content. Boytim says the larger reach has proven beneficial to advertising efforts as well. “Advertising is what really fuels the magazine,” said Boytim. “It has always been a huge success because some of the advertisers wouldn’t otherwise advertise with us because they are out of our normal coverage area, but they are in the coverage area of the teams we feature in the Blitz and we pair them with those teams.”  Boytim said the glossy magazine look is another big sell for advertisers.

As with many things in 2020, the local high school football season was uncertain for the Mirror region’s teams, but Boytim said that he and the Mirror team decided quickly to move forward with the Blitz no matter what the COVID-19 pandemic and subsequent restrictions might bring for the season.  “We have a feature story in the magazine every year, and this year it was about the pandemic and how it was throwing so much into flux this year,” said Boytim. “There are teams out there weightlifting via zoom and finding different ways to work out and condition.  We decided that even if there wasn’t a season that we wanted to put the magazine out to commemorate it.”  Boytim noted that all the teams featured in the 2020 Preseason Blitz have been able to play out the season this year, with only a few cancellations or other issues. He says student athletes along with their coaches and families have expressed gratitude for support from the Mirror.

For additional information, contact Mike Boytim at 814-946-7521or mboytim@altoonamirror.com.