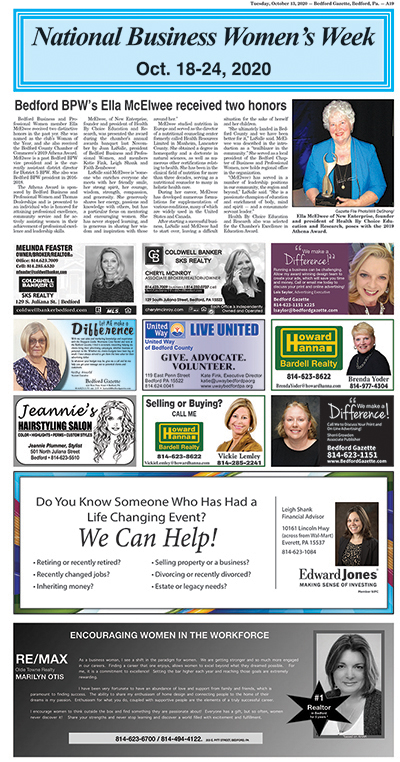 PNA member newspapers have always prided themselves on their business practices, looking to offer equal and unbiased treatment for all employees. The Bedford Gazette takes that devotion to women in the workplace a step further with the annual Women in Business special section. What’s more, perhaps, is how many years it has been published. “We’ve been doing this for at least 17 years,” said Sherri Growden, associate publisher at the Gazette. Growden says the section relies on a strong partnership with the local chapter of the Business & Professional Women organization in Bedford, noting that it is a symbiotic relationship the newspaper has formed with the chapter. “We usually speak with the BPW in early September and begin to plan the event for that year,” said Growden. “We coordinate with them and the county commissioners as to when the presentation of the official resolution will be, and we get reporters and photographers out to cover it.” That coverage is then also included in the special section.

Growden said the Women in Business section has become an interesting project for the sales team because its advertisers are not what most people might typically think of for a women-focused section. “These aren’t bosses saying, ‘Oh, she’s a great gal,’ these are women-owned businesses, or businesses managed by women,” said Growden. The variety of businesses that advertise in the special section runs the gamut and Growden said that is one of the most intriguing aspects of the project for her. Companies that take space in the section range from home care, to trucking and hauling, investment agents and Realtors. “We even have a woman-owned bison farm; Bison Corral,” said Growden. “Many of their bison were featured in the movie ‘Dances with Wolves’.” Growden explained that the bison farm has tours and other attractions and sells bison burgers and jerky. She said that the section reinforces something she often says to herself and her team, “Don’t prejudge. Don’t rule out anybody.”

The success of the special section has been continuous year after year, with advertisements for the section growing more than 600% in the past 10 years. “We keep growing the numbers of ads,” said Growden. “In this day and age that doesn’t happen for every promotion.” Growden shared that there is no plan to thwart or change the special section in the future. She said each year she and her team are eager to see what they can develop by the celebrated third week in October. When she looks at Women in Business, Growden is reminded of the section’s importance. “We get advertisers we wouldn’t normally get,” said Growden. “For many businesses it’s the only, or one of only a couple promotions, that they do throughout the year, so we might have missed that business.”

For additional information, please contact Sherri Growden at (814) 623-1151 or sgrowden@bedfordgazette.com.