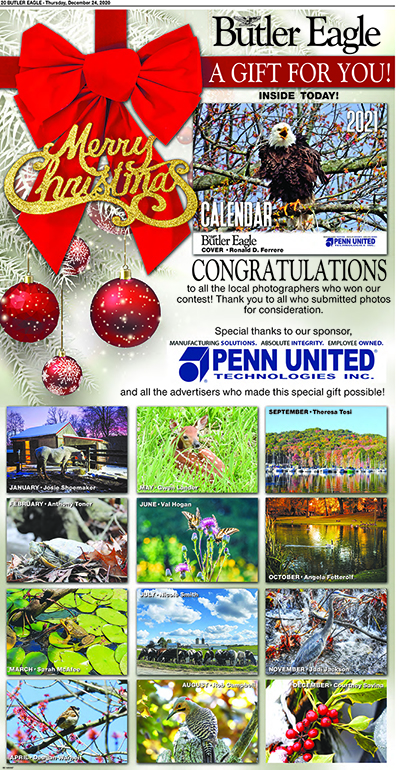 Community calendars featuring local photographs from residents are not something new to most communities. They can be considered somewhat timeless, having existed before social media or a global pandemic. What is interesting about a regional photo contest and calendar program, perhaps, is that it has withstood the test of time and remains a strong, sturdy revenue generator for a news company. “I am not sure how unique it is, and we’ve been doing it for 10 years now,” said Keith Graham, director of advertising for The Butler Eagle. “One thing we learned is – it’s COVID proof.” Graham explained that while the key sponsor of the long-standing photo contest and calendar campaign – Butler County Tourism and Convention Bureau – stepped down this year, there were other local businesses ready to step in with advertising; the project still produced a profit for the publication.

Graham said the Butler community is incredibly engaged in the photo contest aspect of the project. He estimated that the publication receives between 500 and 750 photo entries each year, with entries accepted as soon as the initial 4×15 advertisement appears in early October. Graham said that although there are always some entries that won’t work for the calendar based on subject or quality, many are great examples of the creativity and talent from The Eagle readers. He said they do not limit the number of submissions per person, which yields even more great photographs and continued engagement in the project. Graham said that when he and his team are selecting the winning photographs, they try to stick to a theme that remains true to The Eagle’s readership. “We try to pick things that would be representative of Butler County,” said Graham. “You’re not going to see any palm trees in there – we try to make it look like home.”

From an advertising perspective, Graham said the calendar provides ample opportunity for a variety of different advertising options. “Not only do we sell the banners along the bottom for each month and the minibanners in the upper grid, we can create minisponsors because when you’re working with a grid like a calendar, you always have open spaces you can sell.” Graham also said that he and his team highlight the consistent presence for a full month for the advertisers. Year over year the calendar has seen a 60% to 70% retention rate of the advertising businesses and Graham said often the business renews its placement immediately after the previous calendar is released. The Eagle offers first right of refusal to the previous advertiser for each space. After the renewal deadline has passed, Graham and his team will include the calendar in their discussions with current and potential clients throughout the year, with a stronger push for any remaining open space beginning in late October.

With total revenue between $20,000 and $25,000 each year, the project has continued to be a success for The Eagle. Contest entrants and readers of the publication appreciate it, as well. The winners of the monthly photographs selected receive $50 and the winner of the cover photograph selected receives $100. The winners’ names are featured in the calendar with their respective photos, and also in the publication that accompanies the calendar Dec. 24. Readers look forward to the special holiday gift from The Eagle each year. “We look forward to going through the photographs and seeing it come together,” said Graham. “The businesses get the exposure they’re looking for, and the reader gets a calendar full of some really outstanding photographs.”