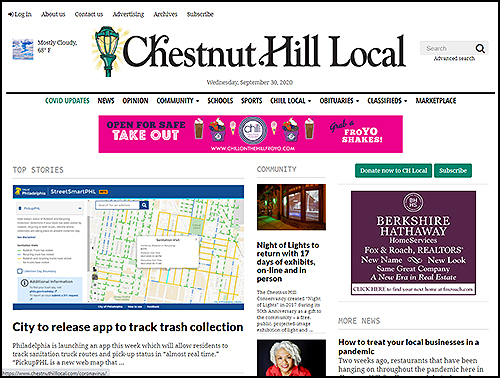 When John Derr became publisher of Chestnut Hill Local in October 2018, he assessed the publication for strengths and weaknesses in order to have a comprehensive plan for the future. One of the first items Derr noticed needed assistance was the publication website. “A newspaper is not unlike any other business in that its website is often the first point of contact with someone who is not familiar with you,” said Derr, “and it continually colors the public’s impression of your business.” Unfortunately, while the site upgrade was important, the funds necessary to make improvements were not available, and the project needed to be prioritized among other everyday items and updates. Derr said he knows this is not an uncommon theme for many smaller papers. “The financial realities of making payroll, paying vendors, redesigning the print product, putting circulation initiatives in place, and just keeping us afloat really, had to take precedence,” said Derr.

With that in mind, Derr and the Chestnut Hill Local team put their energy into growing print revenue and garnered much success in that goal in 2019. With a full redesign of the print product in April 2019 and a subsequent membership drive in January 2020, the publication was poised to provide unique, local and useful information to the community as the coronavirus shutdown began. With an improved financial picture, Derr began to research the website overhaul. After evaluating other newspaper sites and non-newspaper sites, he quickly realized that the creation of a new website from scratch was outside of the team’s means and capabilities both from the initial build out as well as the general maintenance and future usage. As the pandemic shutdown ensued, Derr’s concern deepened as more people than ever visited the website to stay abreast of local pandemic news and information.  “Our site content was terrific, but the platform was an eyesore and we just couldn’t do everything we wanted to do with the WordPress site. Not to mention, we didn’t have an e-edition,” said Derr. “It’s not fun to know what you have to do, but not have the resources or funds to do them.”

Derr refused to throw in the digital towel and pursued several funding options in early spring that he says turned out better than he could have hoped. Derr said Chestnut Hill Local received a PPP loan and an EIDL advance that was converted to a grant, and those were enough to keep the business going. However, the real shot-in-the-arm came by way of a $2500 grant from the Pennsylvania NewsMedia Association and a $5000 grant from Google’s Journalism Emergency Relief Fund. Derr said he specifically noted his intent to use the funds for the website in the grant writing process. In his previous website research, Derr had found Creative Circle Media as a website vendor from Joe Sukle of the former Press & Journal. Through Sukle’s recommendation, Derr connected with Bill Ostendorf at Creative Circle Media and learned more about the platform, which has been used by hundreds of primarily small newspapers. As the grants were approved, Derr and his team began preparations to build and launch the new site.

“We went with Creative Circle Media after looking at options and pricing from some other newspaper website vendors and private web designers,” said Derr. “The final decision was based on the fact that they seem to specialize in small newspaper websites. And, the price was extremely affordable for a small newspaper.” Derr said that in addition to the attractive price tag, the software has proven to allow for a highly customizable site, with no two Creative Circle websites looking the same. The package included its own paywall function, ad server, calendar and other features Chestnut Hill Local had been paying other vendors for previously. The bundle also included an e-edition which was a major necessity and would have been an additional expense. Derr also purchased a content management system from Creative Circle that will function in tandem with the website. “It gives us the opportunity to more easily and often update the website content as compared to our old site,” said Derr, “when our content management system is up and running, it will be even easier. It will save our editor hours every week.” Derr noted that the team has received positive unsolicited feedback about the site from readers, partners, and industry colleagues.

Of the large-scale website project, particularly in the tumultuous climate the pandemic has afforded many publications across the state, Derr noted the importance of maintaining forward movement and progression. “People notice these things and sense the movement and the momentum and I think it helps get people on board to subscribe and advertise,” said Derr, “you need constant activity and betterment, or at least the perception of it.” Derr and his team have measured momentum not only in print and digital redesigns and revenue growth, but also in dedication to the community. In March and April, the Local offered free advertising to local restaurants and support ads for shops and service providers, and in May it produced a blue edition in support of local essential workers. Derr said that while he appreciates a sense of order and timing, he has also learned that things will often happen in an unplanned manner.  John F. Kennedy said, ‘The best time to fix the roof is when the sun is shining.’ Unfortunately, for most newspapers, that’s not a luxury we have,” said Derr, “so, the best time to change the website, or anything else for that matter, is whenever you can.”