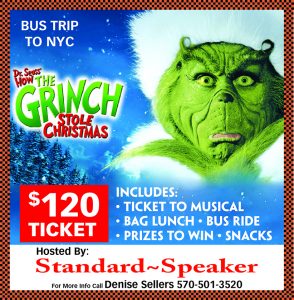 The Hazleton Standard-Speaker has found a way to further engage the community and its subscribers, and it has proven to be anything but Grinch-y! Three years ago, the Standard-Speaker, under the guidance of Advertising Director, Denise Sellers, decided to organize a holiday-themed bus trip for its readers. This first trip was planned for a group of approximately 100 people to go to Radio City Music Hall in Manhattan to see a holiday show featuring the Rockettes. Tickets for the trip were advertised in the paper for approximately one month in advance of the event, two or three times per week. In addition to the regular tickets sales, event sponsorship packages were also made available and promoted by Sellers and her team. These packages included three tiers of participation that would afford the advertiser tickets for the event as well as the accompanying dinner based on their level of sponsorship. The trip was a great success, and it wasn’t long before the Standard-Speaker was receiving inquiries from readers and advertisers alike as to when the next trip would be taking place.

The trips continued, with one being offered in spring, fall, and winter, and more trips being added each year since the initiative’s inception. “The advertisers love it,” said Sellers, “We had two busses – roughly 100 people – on our first trips. Now at times we get up to three buses – roughly 150 people – and one third of those are advertisers.” The Standard-Speaker trips have taken its readers to Yankee Stadium, Broadway shows including The Grinch and Aladdin, and recently, they added wine/vineyard tours.

The next holiday trip will likely be to another wintery-themed Broadway show, Frozen, and Sellers and her team are eager to get the promotion underway. It’s not hard to figure out why since the team has netted between $10,000 – $20,000 per trip. “The net income from these trips has been really outstanding, and it’s great that we have found a way to serve our community and readers while adding to our bottom line.”

For additional information, contact Denise Sellers at 570-501-3520 or dsellers@standardspeaker.com.