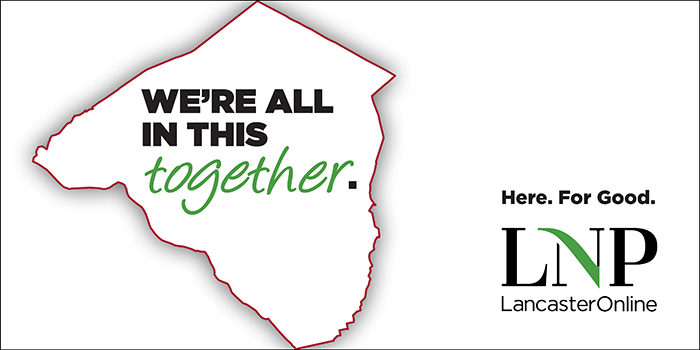 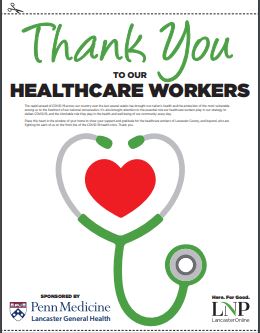 In the days following the social distancing and stay-at-home orders made on national and local levels, Lancaster area citizens were at a loss as to what their future held.  Many people felt alone, both physically and mentally.  It was during that week that Claudia Esbenshade, social media manager at LNP|LancasterOnline, had an idea about a campaign to share a message of reassurance with the LNP|LancasterOnline community. Esbenshade shared her idea with Alex Henry, brand and communications manager, and Chris Stahl, director of client solutions.  Henry and Stahl jumped immediately on board and started to work via a cross-departmental project for a 4-day turnaround on what would become the first in a series of ad campaigns to run in the Sunday edition of the newspaper and digitally on LancasterOnline each week.  “It was a truly collaborative effort from all departments from sponsorship – which we had within a day – to artwork,” said Henry. “It was a really quick turnaround, which shows our team’s strength and ability to work together to get things done.”

On Sunday, March 22, the campaign ran with a simple, yet meaningful message: “We’re all in this together.” The message was accompanied by a large red rose, the city’s symbol, and a note encouraging readers to cut out the rose from the print edition, or print it online and hang it in their window, door or other visible place to send a message of unity.  Henry said that she and the LNP|LancasterOnline team felt the ad campaign and what it represents is something of a moral obligation the publication owes to its readership and the Lancaster community.  “We have the opportunity to leverage our position in the community to provide reassurance and bolster the spirits of our citizens,” said Henry. “It’s about being a good neighbor and responsible partner to the community.” Henry said she is a resident of the city of Lancaster and has regularly seen houses with the roses displayed in windows and doors during her daily walks.  The feedback received by the team overall for the program has been strong and positive to date.

From that one ad campaign, a billboard campaign and weekly ad campaign have been created.  The weekly ad campaign ran again on March 29 with a new message: “Thank you to our healthcare workers.” The campaign featured a stethoscope with a heart inside it, and again, readers were encouraged to display the icon in a window or door.  Henry said the messages to come in the campaign will continue along the path of thanks.  “We’re working on ‘thank you to grocery store staff,’ ‘thank you truckers,’ etc.,” said Henry. “Really, there are so many members of the Lancaster community who deserve gratitude and encouragement at this time.” Each ad campaign features a new sponsor and the group has not had difficulty anchoring these exclusive and highly-visible sponsorship opportunities.

“This has provided a unique chance for our team to think quickly and creatively,” said Henry. “It’s nice to know we are providing people with a symbol of hope and something else to do and to think about.”