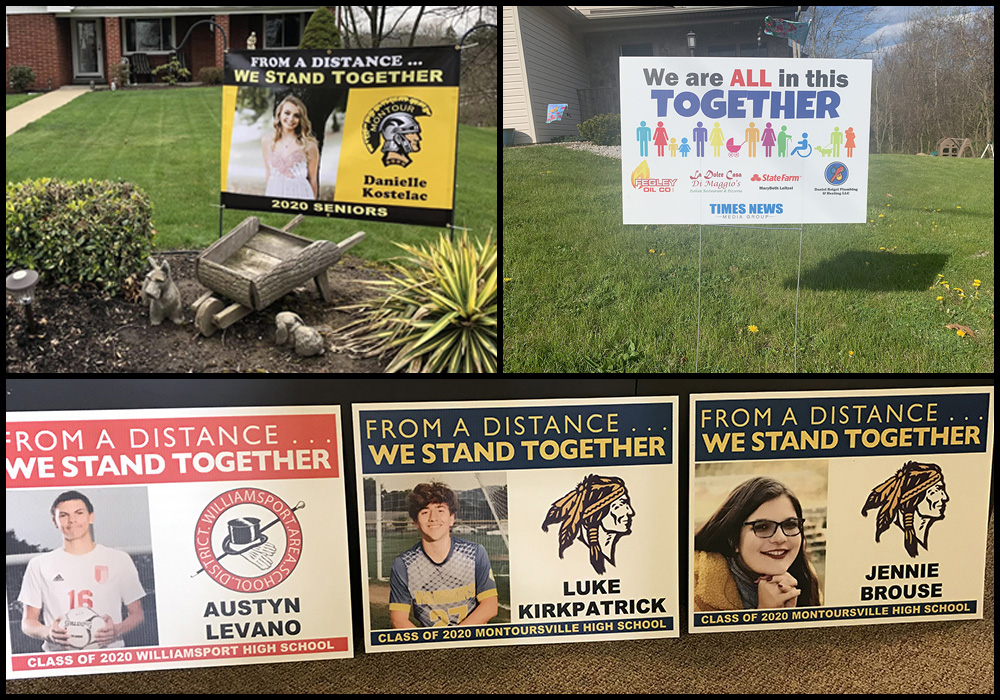 Yard signs bring messages of hope and celebration for community, and the publications that serve them, during COVID-19

During the COVID-19 pandemic, the Pennsylvania NewsMedia Association (PNA) actively sought to discover, create and provide additional benefits and support for news media outlets across the commonwealth.  One solution came by way of virtual meetings for key management and advertising staff for PNA-member publications periodically throughout the pandemic.  “These meetings helped to connect these individuals to share in their experiences throughout the crisis and provide invaluable information with one another with a greater purpose in mind,” said Jane Hungarter, director of marketing at PNA. “It’s what we all want, it’s our mission, really – to maintain strength, determination and creativity of the news media industry during a period in human history unlike anything that has previously been experienced in our lifetime.”  Publishers, owners and directors from across the state met virtually to discuss their struggles and triumphs, excluding no idea or issue from conversation as they brainstormed ways to keep their organizations viable in the face of the COVID-19 pandemic and subsequent regulations on citizens and businesses.

One idea discussed in an early meeting was a successful campaign in the northwestern part of the state that involved yard signs created by a PNA-member paper, sponsored by local businesses and distributed to the community through a third-party sign making company.  Several of the other PNA-member publications on that mid-April call found hope in the sign campaign potential and through their own ingenuity, as well as, in some cases, the support of their parent companies, began campaigns of their own.

Jen Benninger, advertising director at the Times News in Lehighton, was on that call. She and her team got straight to work on the campaign, securing the sign supply company with a lead from another publisher and finding sponsors.  Benninger said that her community presented a unique opportunity to further personalize the signs to smaller and more distinct areas within the readership while also providing additional sponsorship opportunities.  “We broke the readership into four regions and created a sign template for each,” said Benninger. “The message and graphic are the same for each: ‘We’re all in this together,’ but we were able to find four different sponsors for each of the regions.”  In addition to the sponsor company logo, the signs also included the publication logo.

Benninger said the campaign has been a great success for her team and the community.  She ordered 120 of each sign and gave each of the sponsors the opportunity to be a distribution point for the signs, announcing their availability via an article in the paper, a quarter-page ad in the paper and on social media.  The sponsors and readers have shared positive feedback to date.  One sponsor, Layne “The Doc” Roberts from Colossal Radio, said, “This idea of these signs ‘We Are All In This Together’ is such a positive visual and a fantastic thought to the current situation we are all facing.”  And the campaign was so successful that Benninger has already begun work on the Class of 2020 sign project.  That project will be bought and paid for by individuals in the community, much like Laurie Doyle’s banner campaign at the New Castle News.

Doyle, director of advertising at the New Castle News, heard of the successful sign campaigns taking place at other papers and immediately saw the unique opportunity her previous relationship with Perq, a sign and banner making company in Indiana, presented to her and her team.  “We have a longstanding relationship with Perq,” said Doyle. “They have an excellent turnaround time – they promise six to eight days, but in some cases, people receive them in two to four days.” Doyle and her team quickly and seamlessly put together a banner campaign that featured a message to support local graduating seniors: “From a distance, we stand together.”  The banners included a picture of the senior, their high school mascot and the message.  Perq offered several banner sizes ranging from 2’x3’, 3’x4’, and 3’x8’. The signs were not sponsored, but rather purchased by individual readers and shipped directly to them at the address of their choosing.  In addition to the banner, the packages that Doyle created included ads in the publication recognizing the senior. The campaign wasn’t limited to the paper’s market; the team had participation from families and seniors more than an hour away.

Doyle said the campaign has received tremendously positive feedback to date.  One mother, Kim Kostelac, wrote a note to the New Castle team that read: “Received Danielle’s banner today. It looks great! Thank you so much Laurie Doyle and the New Castle News for the recommendation!” For Doyle, the campaign not only reaffirmed the publication’s position and invaluable support of the community as it pertained to the graduating seniors, but also how it could assist local businesses in the current environment and in the future as the community begins to reopen. “This is the time to show them that we are that ‘one stop shop’ they need,” said Doyle. “The options we have available for them are really limitless.”  Doyle was so proud of the reception of the banner campaign that she shared it with her CNHI colleagues on a regional call and said that all of the other publications in her region have used the idea with great success.

It was a similar regional newsgroup update that jumpstarted the yard sign initiative for Jessica Kowalchick, ad promotions coordinator at the Williamsport Sun-Gazette.  After reviewing a brief from the Ogden newspaper corporate office in mid-April, Kowalchick and her team began its own program with yard signs to celebrate 2020 graduates in the area.  Like Doyle, Kowalchick worked with Perq for the creation and distribution of the signs and was appreciative of the touch-free capabilities the set up afforded the Sun-Gazette for the campaign.  Kowalchick said she had a good feeling about the project from the beginning. “Even though we had never done anything like this before, I knew it was going to be well received,” she said. “I knew this (the pandemic and related quarantine) was going to be really hard for the seniors and their families, and the signs would mean a lot to them.”  She was right. Upon the release of the first signs and associated ads on April 21, the campaign has taken off.  Kowalchick and her team offered packages that included yard signs with a photo of the graduate, school name, logo and colors, as well as a 1”x3.5” ad in the paper with the same information. The Sun-Gazette has plans for a special graduation edition of the paper on June 11 that Kowalchick said will be another first for the publication as it will go beyond a special section and include graduation coverage throughout the paper that day.

While the yard sign and banner campaigns run by the Times-News, New Castle News and Williamsport Sun-Gazette are different in some ways, the meaning for the publications and ad teams behind the respective campaigns is quite similar: be creative, exercise ingenuity and find revenue.  Benninger, Doyle, and Kowalchick checked each of these boxes and helped to provide hope and celebration to their readers while doing so.