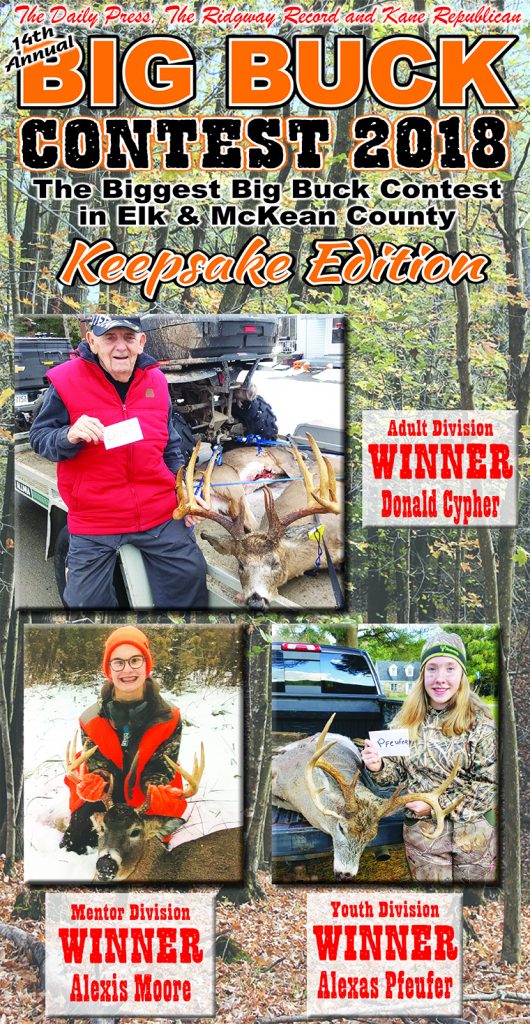 What has newspaper readers ranging in age from 8 to 84 joining in to engage and celebrate with three northwestern papers in Pennsylvania? Why, the annual Big Buck contest, that is administered by The Daily Press (St. Marys), The Ridgway Record and the Kane Republican, of course. The contest is now entering its 15th year and is more successful and engaging than ever. “We had over 150 entries last year,” says Christie Gardner, publisher of all three publications, “and the awards banquet hosted as many as 400 hunters from Pennsylvania.”

Gardner, who personally enjoys deer hunting as well, said the contest has become a fixture in the communities who participate. She and her team have already started work on next year’s contest. Advertisers purchase packages that span a four-month period, from September to December, that affords them exposure in all three publications, and therefore a large segment of the northwest region of the state. Gardner says the advertisers range from the traditional businesses who generally advertise throughout the year, to more hunting-related businesses – from taxidermists to beer distributors.

The Big Buck contest isn’t just meant for big bucks. Gardner says that everyone who hunts is welcomed to enter the contest by having their buck measured and evaluated at one of the measure stations located throughout the readership area, and there is no entrance fee. “We have so many different prizes; there really is something for everyone – everything from oldest and youngest hunter, to smallest buck. This year’s winner for the largest buck was also the winner for oldest hunter.” The continued involvement from old and new newspaper readers and advertisers is a sure sign that Gardner and her publications are a buck above the rest.

For additional information, please contact Christie Gardner at 814-773-3161 or sales@ridgwayrecord.com.