The Spirit brings collaboration, unity to police and citizens 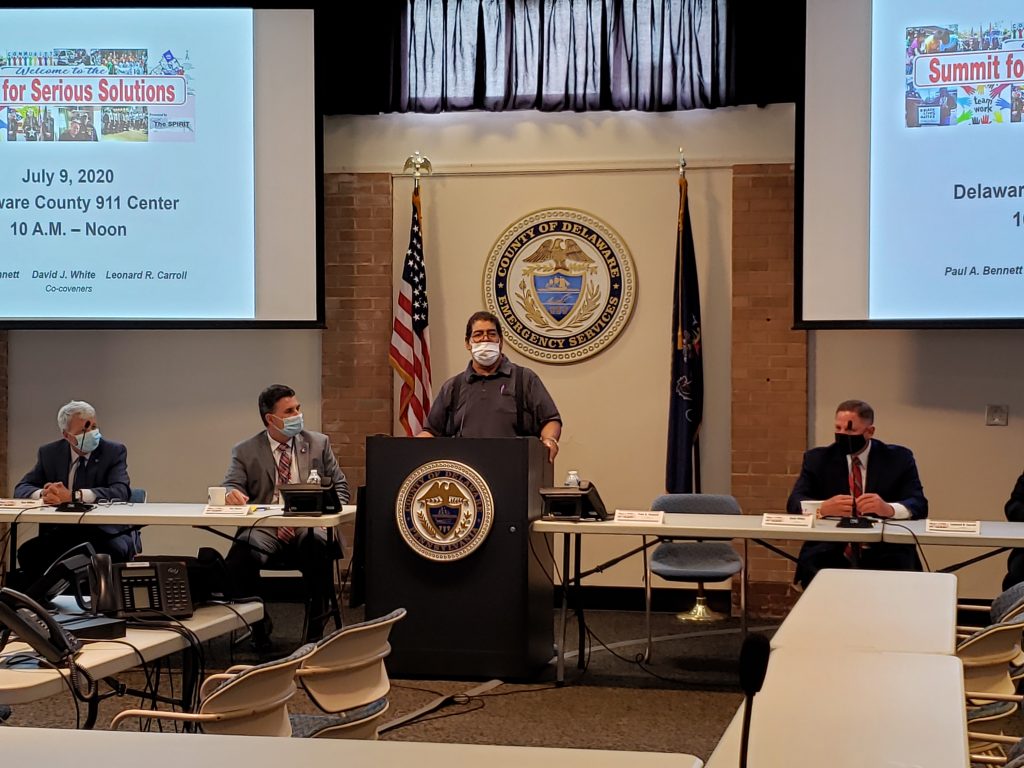 When Paul Bennett, publisher of The Spirit in Delaware County, saw the national news of police brutality and racial tensions in the early summer months of 2020, he considered the relationship between the police and citizens in his own local news coverage area.  While Bennett said there had been some intermittent, small issues, there had been nothing near the experiences in Minneapolis or Georgia.  With this in mind, Bennett began a campaign to bring together the local police and the communities they serve to discuss what was happening on a national level, as well as what was being done locally.

Bennett recognized the intense need for open communication between the police and the citizens of the community, and he felt compelled to take a more active role in assisting his readership in achieving improved communication. “The role of community journalism has changed,” said Bennett. “We used to just tell the story. You tell side A, you tell side B, and then the community does the rest. We have found that the community doesn’t necessarily do the rest.”  The Spirit team organized the first in a series of meetings called the Summit for Serious Solutions for July 9.  Bennett reached out to police chiefs from the 49 local municipalities and made contact with the Pennsylvania State Police who oversee the municipalities without a municipal police force.  He also reached out to the heads of local activism organizations, such as the NAACP. Bennett found that the meetings could be held at the Delaware County Emergency Services 911 Center, free of charge for the group.

Many of the people Bennett invited attended the first meeting, where two critical points were revealed. First, police in Delaware County were as appalled with the national events as the community and they would never consider the use of the tactics in the national news. Second, police in Delaware County were not connected well with the community, so the community was more likely to react to the national news.  Following the findings of the July 9 Summit meeting, The Spirit began the Behind the Badge segment in the publication to highlight police units and departments, as well as the individuals themselves, the goal of connecting the Delaware County police and its citizens.  The second Summit meeting took place on August 13, where Delaware County police discussed recent initiatives and again addressed communication issues and needs.  Bennett said the attendance for both meetings was bolstered not only by the presence of the police chiefs and activism group leadership, but from the county law enforcement chaplain, local business leaders and current and former members of the county council.

The third Summit meeting took place on September 9, and Bennett said the meeting was devoted to sharing an additional initiative and, he says, the fruition of solutions to the issues discussed in the previous two meetings.  “We are going to lead the creation of The Delaware County Police/Community Institute,” said Bennett. “We will have a 9-member board: 3 police officers, 3 individuals representing the community, and 3 individuals representing local businesses. Ultimately this will be designed to marry police and community in a more formal and predictable way so that both entities will have a vehicle to express concerns and ideas they have and then work on them together.”  Bennett is no stranger to the creation and early work of a statewide non-profit, having served as one of founding members of the Philadelphia Association of Black Journalists more than 40 years ago.  He said that the preliminary objective of The Institute would be to educate and institutionalize the relationship between the police and the community in Delaware County.

“Some of the leadership in the community today is really lacking,” said Bennett. “News organizations have a valuable potential role – where the leadership doesn’t exist, we need to provide it.”

For additional information, contact Paul Bennett at 215-837-6858 or pbennett@myspiritnews.com.