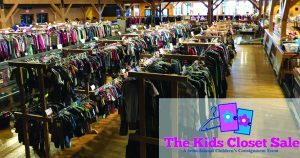 For nearly a decade, The Kids Closet Sale, a semi-annual children’s consignment event, has helped families in Carbon County stock up on clothing, high chairs, books and games and many more essential items. The Times News (Lehighton) and Lehigh Valley Press recently purchased the event from the original owner.

The news media organization had been interested in hosting community events, so when this opportunity presented itself, it was a natural fit for many reasons. The event was already established and successful. They had ample warehouse space to store the reusable racks that are used to hang the clothing items. The organization’s parent company, Pencor, owns the venue in which the event is held, and therefore rents the space back to the newspaper organizations. The newspaper is also able to print all the associated promotional materials internally. Perhaps most importantly, assuming ownership of the event further demonstrated the company’s commitment to being an integrated resource for the community they serve – particularly for mothers aged 20-40 who may not be regular newspaper subscribers.

A committee of eight workers came together to organize the event and develop a marketing strategy.

Three months before the sale, print and digital ads that encouraged parents to clean out their closets, and register to be a consigner, were run. The Times News’ first Kids Closet Sale attracted 116 consigners who brought more than 19,000 spring and summer items. The consigners were responsible for registering each of their items and printing an inventory information card that was then attached to each garment or item.

Three weeks before the event, print, digital and social media ads that invited shoppers to attend the sale were inserted. Additional promotion of the event was done through a billboard posting, postcards, posters, yard signs and an advertiser-sponsored coloring book.

Nearly 700 customers made a purchase over the course of the three-day event that attracted first time moms, parents of multiple children and grandparents. More than half of all the items available were sold, and 50 percent of the remaining items were donated to either a church thrift shop or local animal shelter.

The Times News generated revenue for the event from various sources. Each consigner paid a $15 fee to register through PayPal. Shoppers had the option of paying a $10 admission fee to access the event on the first day for the best selection. Admission to the event was free on the two subsequent days.

Advertising banners that were on display at the event were also sold along with sponsorship pages in a coloring book that was distributed at the event and inserted into the newspaper a week prior to the sale. The newspaper earned a net profit of approximately $8,700 from the event.