The 75th anniversary of D-Day is an appropriate time for us to recall the sacrifices made by those serving and who had served in our Armed Forces. To mark this occasion, the Ernie Pyle World War II Museum in Dana, Indiana, and Scripps Howard Foundation offer this reprint of three columns written by Ernie Pyle immediately after the Normandy invasion. It’s a reminder to all of the ultimate sacrifice made by so many Americans to maintain the freedoms we enjoy.

If you decide to use the materials for your recognition of the (June 6) 75th anniversary of D-Day, we ask that you consider adding a paragraph about the Ernie Pyle World War II Museum.

Donations may be made through the museum website at www.erniepyle.org.

Understanding space limitations, you may want to consider printing one of the columns and uploading all three to your newspaper website.

If you want to expose your readers to additional columns by Ernie Pyle, you could include the following link to the Indiana University School of Journalism, housed in Ernie Pyle Hall on the Bloomington, Indiana, campus, where your readers can access additional stories written by him: 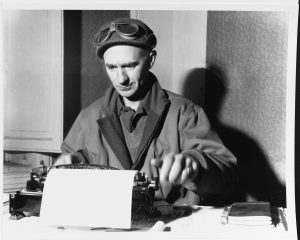 Ernie Pyle with a Tank 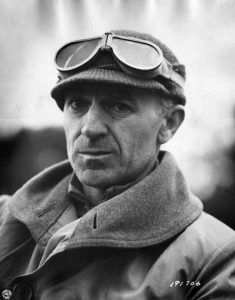 The son of a tenant farming parents in west-central Indiana, Ernie Pyle became history’s greatest war correspondent. When Pyle was killed by a Japanese machine gun bullet on the tiny Pacific island of Ie Shima in 1945, his columns were being delivered to more than 14 million homes according to his New York Times obituary.

During the war, Pyle wrote about the hardships and bravery of the common soldier, not grand strategy. His description of the G.I.’s life was more important to families on the home front than battlefront tactics of Gens. Dwight Eisenhower, Douglas MacArthur, George Patton or Omar Bradley.

Prior to the United States’ entry into World War II, Pyle traveled to England and wrote about the Nazi’s continual bombing of London. His columns helped move the mood of America from isolationism to sympathy for the stubborn refusal of Great Britain to succumb to the will of Adolf Hitler.

The Pulitzer Prize-winning journalist’s legacy rests in his words and the impact they had on Americans before and during a war that threatened to take the world behind a curtain of fascism. His columns open a window to the hardships endured by the common U.S. soldier during World War II and serve today to honor what has been called “The Greatest Generation.”

The Ernie Pyle World War II Museum features the famous journalist’s birthplace and a museum dedicated to Pyle’s life and writings as a war correspondent. It is owned by the Friends of Ernie Pyle, who are dedicated to preserving and expanding the legacy of the writer whose columns linked the soldiers on the front line to worried families on the home front. To preserve Ernie Pyle’s memory is to preserve the sacrifices made by what has been dubbed “The Greatest Generation.”

To learn more about the Ernie Pyle World War II Museum located in Dana, Indiana, or make a donation to assist the efforts of the Friends of Ernie Pyle to honor him and that generation, go to www.erniepyle.org.