publisher of the Chestnut Hill Local

The Chestnut Hill Local went blue on May 28, 2020, to honor frontline personnel and essential workers throughout the community who have been caring for, providing for and protecting the rest of us since the pandemic began. 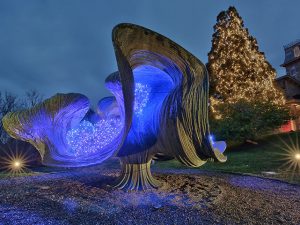 The inspiration for the idea was a photo we published in the Local in April of an outside Bertoia sculpture at the Woodmere Art Museum adorned in blue lights as a tribute to first responders and essential workers. I thought, “What can we do to honor these local heroes in a similar fashion?” Back in October, we had published a pink edition of the Local to raise awareness of breast cancer prevention. It occurred to me that a blue newspaper would be an impactful way to salute not only the doctors and nurses caring for our sick, but also the grocery store clerks, transit drivers, mail carriers and others who have been providing for and protecting all of us.

I also thought that this special blue edition would be a good opportunity to introduce the Local to people who don’t receive the paper on a regular basis, so we decided to expand our distribution and deliver to an additional 7,500 homes in the area. We would include a full-page ad promoting subscriptions or donations.

We met as a team to discuss the content, advertising, production and distribution plan. We decided to mail the 7,500 samples to everyone in Chestnut Hill, Wyndmoor and some homes in Mt. Airy. We would sell a sponsorship to defray the added costs for production and mailing. Our advertising team felt the effort would lead to additional ad sales. To be honest, if we did not feel we could sell a sponsorship or that the added distribution would lead to additional revenue, we would have gone ahead with the blue edition, but would have scrapped plans for the additional distribution. Once we had started promoting extra distribution to advertisers, we were committed to following through. So, there was some risk involved. I know that “risk” is the dirtiest four-letter word in all of newspaperdom.

In spite of the uncertainty, our circulation and marketing manager, Leisha Shaffer, bought the mailing lists and made the arrangements with Susquehanna Printing.

Our editor, Pete Mazzaccaro assigned the stories to staff and to correspondents. He did a great job of including a variety of features, including stories on: a local doctor who contracted and recovered from COVID-19, a grocery store prepared foods manager, a woman who has been a nurse in Philadelphia hospitals for 42 years, older parents who are caregivers for adult children with specials needs and the problems posed by the lockdowns and stay-at-home orders, a local organization of volunteer pilots who have been flying critical protective equipment to smaller communities throughout the United States that were unable to acquire it on their own, a church assisting the needy with “Blessing Bags” for homeless and food insecure in the community, a pet store owner giving free pet food to those in need, a local chef who is feeding the homeless in the area, and more! That’s in addition to other non-coronavirus news we covered in the issue.

Our sales team of Sonia Leounes and Leslie Cerf began selling the issue to local businesses and reaching out to prospective sponsors. The ad sales went well; the sponsorship not so much. We were turned down by a dozen or more businesses. The deadline was only a day away when, on a scheduled Zoom call with Chestnut Hill Institutional Leaders ( including Chestnut Hill College, The Morris Arboretum, The Philadelphia Cricket Club, the Woodmere Art Museum and more), I mentioned the blue paper and that we did not yet have a sponsor and one of them said, “What if we all split the cost?” They all agreed and it was sold.

The blue edition was our largest of the year so far at 36 pages. (Thank you Blaise Brugger and Amy Teta, our production staff). In fact, our advertising revenue for the week beat our advertising revenue for the same week prior year by 48% ( first time we beat last year since the pandemic forced businesses to shut down), and our ad count beat last year’s by 22%. The blue paper was also well received in the community. There were very positive comments on Nextdoor, Facebook and Instagram in addition to the emails and calls we received. We also sold a few subscriptions. The success raised the morale of the entire staff.

Moreover, we did what good community newspapers do: We brought readers news and information they would not have gotten anywhere else; we shone a light on good people doing good things for our neighbors; we brought a new idea to our local businesses and gave them an opportunity to be part of a community-wide salute to our local heroes; we provided those local businesses the ability to connect with people who are in the market for their goods or services, and in this case, we expanded that pool of potential customers for them.

At some point, early on, I asked “if this is a good idea for us, is it a good idea for an even bigger show of support for frontline workers by the entire PA newspaper community?” I had visions of our Pennsylvania newspaper community making national news with every paper in the state going blue for one day to honor our doctors and nurses and EMTs, etc. So, I emailed Jane Hungarter at PNA and she talked to Brad and Matt and Mary and invited other Pennsylvania newspaper leaders to a Zoom meeting. From there, PNA rolled the idea out to all of its members and I believe 30 or so newspapers took part, some of whom expressed they had had good success from the effort.

View Blue Pages from newspapers across the commonwealth.