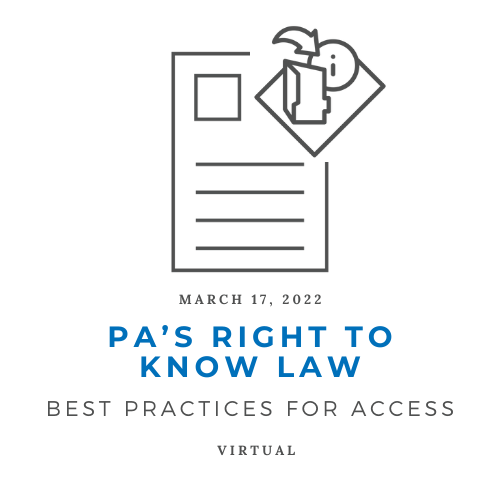 During this jam-packed session, we’ll not only review the basics of the Right to Know Law, but also explain other essentials of access in Pennsylvania.  Topics to be covered include tips for drafting a successful RTK request, details about administrative appeals, mediation and enforcement as well as a review of important court decisions and pending cases.  We’ll also take a look at what’s developing and what to expect from proposed legislation.

Most appropriate for editorial staffs, both experienced and inexperienced.

This 60 to 75-minute webinar is scheduled to begin promptly at 12 noon, eastern time.

Registrants must have both a computer and audio/phone in order to participate.

There is no cost for PNA members.  $20 for non-members.

To register, complete the form below or email the PNA Foundation.  A confirmation with log in instructions will be sent to each registrant one or two days prior to the session.

Elizabeth Gerloff Wagenseller began serving a six-year term as Executive Director of the Pennsylvania Office of Open Records in January 2021. She leads all aspects of the independent, quasi-judicial agency that decides appeals of denied requests for records under the Right-to-Know Law.  Before coming to the OOR, Liz was actively involved in promoting government accountability, serving as Chief of Staff to former Pennsylvania Auditor General Eugene DePasquale. In that capacity, she provided direct input to the Auditor General on all issues related to the Department, and oversaw daily operations, directed strategy for all Department communications and legislative initiatives, and collaborated with citizens, legislators, and other stakeholders on various issues.  In addition to her career in the public sector, Liz worked at two national public opinion research firms where she utilized survey and focus group research to develop strategic plans for nonprofits, advocacy groups, and campaigns. Liz earned a degree in economics from the College of William and Mary.

Craig Staudenmaier, a Partner at Nauman Smith Shissler & Hall, Harrisburg, has built a reputation as an authority on Right-to-Know and Media Law in the Commonwealth of Pennsylvania. He is at the forefront of issues and landmark cases stemming from the Commonwealth’s open records and meetings laws. Craig routinely represents the print and broadcast media, businesses, and private individuals in public records and open meetings access matters and issues involving the subpoena of reporters, privacy, and defamation claims.  He served for four years as Co-Chair of the Pennsylvania Bar Association’s Bar/Press Committee.  Craig also serves as General Counsel to the Pennsylvania Freedom of Information Coalition and he is currently the immediate past chair of the PNA Foundation.  In October, 2021, he was inducted into the National Freedom of Information Coalition Open Government Hall of Fame as a ‘Hero of the 50 States.’  He received a B.A. from Washington & Jefferson College and a J.D. from the Dickinson School of Law.

Melissa Melewsky is Media Law Counsel for the Pennsylvania NewsMedia Association. She provides legal advice and advocacy to newspapers across the Commonwealth on a wide range of legal topics affecting the newspaper industry. Melissa also advocates for newspapers as an amicus curiae in the Pennsylvania judicial system in cases affecting the newspaper industry including access to government records and meetings, First Amendment rights, and defamation. Melissa has been a guest lecturer throughout the Commonwealth for media and civic organizations as well as government agencies and the court system on the Right to Know Law, the Sunshine Act and other laws that affect the media industry. She is a former co-chair of the Pennsylvania Bar Association’s Bar Press Committee and is currently an active member.  Prior to joining the Association, Melissa was the judicial law clerk to the Honorable William Harvey Wiest, Northumberland County Court of Common Pleas. She received a B.A. in Telecommunications from the Pennsylvania State University and a J.D. from Widener University School of Law.

The PNA Foundation offers this important training as we join PNA and other news organizations across the country in recognizing Sunshine Week, March 13-19, 2022. 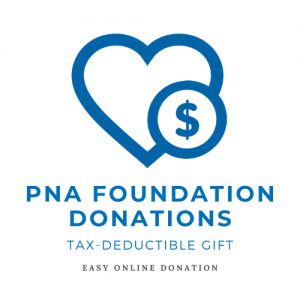 This valuable PNA Foundation training is provided at no charge.

Please consider a tax-deductible donation to the PNA Foundation in support of sessions like this one that help the PA news industry.

Support the PNA Foundation!  All it takes is a minimum of $100 and you’re a Friend of the Foundation!

Become a Friend of the Foundation!