“Faces of” campaign showcases the people behind local businesses 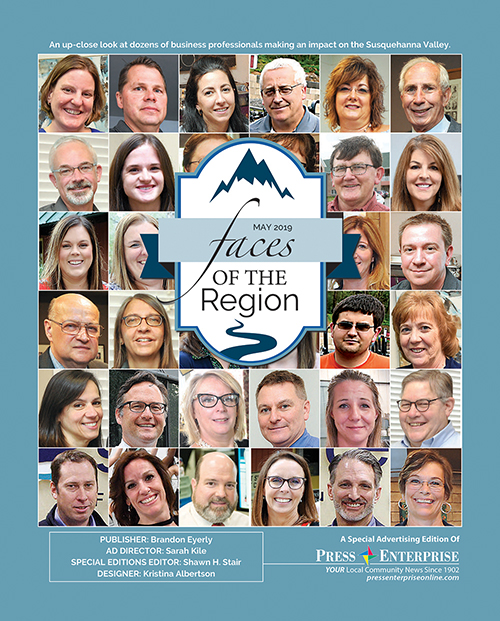 Pennsylvania newspaper advertising departments are led by highly creative individuals who possess a great deal of determination and place distinct value in thinking outside of the box. Sarah Kile, advertising director at Press Enterprise, is one such individual and she charges her ad team to be the same: to continually bring interesting ideas to the table. One idea came from a team member upon a return from a personal trip to Maryland. The sales rep found a magazine there that showcased local businesses in a unique way, by writing editorial content about the business and key members of its staff. “She came to me and said, ‘I think we really need to do this,’” said Kile. “I had been looking for something new and affordable that we could do for our small businesses, since we have so many in our area.” So, in the fall 2017, Kile and her team began work on what would become the “Faces of” project: a quarter-fold special edition featuring local businesses through editorial content about the owner, staff or other key individuals in the company.

Kile said the first year’s process was more involved since she and the Press Enterprise team were starting from square one. She employed the assistance of a graphic artist on staff to design the format and overall look and feel of the project. The special editions staff editor developed a series of questions that the sales reps could take to the local businesses to provide the necessary information for the articles. Kile said the questions were great tools to get the conversation going for the showcase articles, and the editor’s work on creating the content afterward was invaluable. She also said that staff photographers scheduled shoots with the participating business, and were able to get dynamic photographs that echoed the focus of the showcase. After the information and materials had been amassed there was still a lot to be done in the assembly of the section. “It probably took us about a month to really get through the assembly and review process,” said Kile. “It was really a whole-staff-working-together type of project.” The first edition of the “Faces of” campaign was released in May 2018, with another every year since. Kile said the project wasn’t as long or laborious for the subsequent editions as she and her team already had the general layout and article interview questions and a better idea of the timeline.

The campaign was successful with many local small businesses that Kile said have not otherwise advertised with Press Enterprise. “We didn’t approach it with a predetermined list or only certain categories – we wanted it to be pretty much open to anybody,” said Kile. “We kept the cost down – much lower than what small businesses could have received on regular advertising or other special sections.” Kile said that the broad approach greatly aided the team as the showcase stories in the section included the local YMCA, a custom framing business, a hearing aid shop, a sewer and drain business, a chiropractor and restaurants. Kile said the advertisers’ response to the final project was incredibly positive. “They definitely liked it and felt it was worth their advertising dollars,” said Kile. “They loved seeing their profiles and stories in there.” Kile did mention that she and her team were met with some resistance from some companies that had participated in the campaign the first year when approached to participate again in the second edition. Kile said it is very important to think creatively and put a different spin on their involvement; to help them craft a new story, feature a new employee or take a new angle on the business. She said it also helps to know some will not want to participate consecutively so she and her team have learned to bolster the prospect list with that in mind.

Kile said the community’s response to the “Faces of” section has been strong, with great reader feedback so far. In 2020, influenced by the COVID-19 pandemic, Kile and her team took the project in a different direction and created the “Faces of the Front-Line” section featuring local front-line workers. They turned the project into a giveaway for the nominated front-line workers, with a prize of custom-made orthotic shoes donated by a local chiropractic clinic. Kile said the team is planning for another edition of the section in the spring and look forward to many more in the future.

For additional information, please contact Sarah Kile at (570) 387-1234 or sarah.kile@pressenterprise.net.