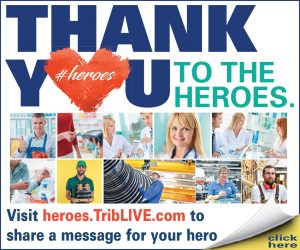 In early April 2020, a reader reached out to Jenn Bertetto, publisher of Trib Total Media, with an idea to help the publication thank local medical and healthcare workers. Bertetto brought the idea to her team, including Matt Miller, chief revenue officer at Trib, and within a week the team had developed the idea into the “Thank you to the Heroes” program that launched on April 12. “The idea really evolved quickly,” said Miller. “We went from only considering the health care workers and first responders to considering and including all essential workers – anyone who is a ‘hero’ during this time.”

Trib’s Heroes program launched with an article and devoted website where individuals could upload their hero’s information including a picture, what the hero does and why the individual considers that person to be a hero. The information was then checked by a moderator and populated onto the page, located on Triblive.com. Miller said that the pictures and content for each submission varied, which created a bit of a patchwork look to the page. While the picture types and sizes ran the gamut, the team was able to superimpose the “Thank you to the Heroes” logo as well as several other logos with sayings such as “Not all heroes wear capes” or simply, “Hero!” onto each to tie the page and project together.

The Heroes program was sponsored entirely by Trib, with all submissions remaining completely complimentary to the readers. Initially, the team had offered a paid option that would allow the submission to be included in a print version of the page, however, the team ultimately decided to remove it and maintain the program as a free, online-only initiative. The community responded positively, with more than 200 submissions as of May 27. Miller said that some of the hero posts have also provided leads for editorial content as well, including an article about a local principal.

Miller said he, Bertetto, and the entire Trib team appreciate the opportunity to offer the program to readers and provide them with an outlet for thanking the important individuals in their lives during the pandemic. “This is something that I think is good for everyone’s psyche during this time — to see that goodness is still happening in the world, and there are plenty of thankful people out there recognizing the good,” said Bertetto.

For additional information, contact Matt Miller at 724-350-7718 or mmiller@triblive.com.