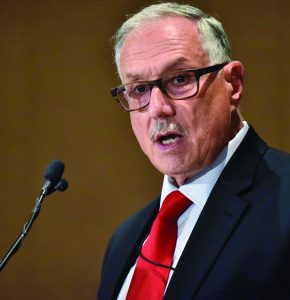 Brad Bumsted is the bureau chief of The Caucus, a watchdog publication which focuses on state issues. The weekly paper, available in print and digitally, features  investigative reporting and long form journalism in an era of sound bites,  the 24-hour news cycle, and unending Tweets. Its purpose is holding public officials accountable and making state government more transparent. Bumsted worked 18 years as an award-winning reporter for the Pittsburgh Tribune-Review covering Harrisburg. Previously he was a reporter for Gannett News Service in Harrisburg and Washington D.C. and Florida. He began his career in journalism at the Chambersburg Public Opinion, where is top accomplishment was being hung in effigy in the 1974 Mercersburg Halloween Parade. In a career spanning four decades, Bumsted has done his share of covering tarmac stops and visits by presidential candidates, starting with Jimmy Carter and Ted Kennedy in Western Pennsylvania during the 1980 Democratic Primary. For Gannett News Service and the Tribune-Review, he covered Pennsylvania delegations at seven presidential conventions starting with the 1984 Democratic Convention in San Francisco. He is the author of two books and co-author of another. His most recent book, Keystone Corruption Continues: Cash Payoffs, Porngate and the Kathleen Kane Scandal , is available on Amazon, as is first book, Keystone Corruption, a history of Pennsylvania corruption dating to the 19th Century. Bumsted lives in Mechanicsburg with his wife Gail. They have a daughter, Lindsey, who holds a J.D .degree at Temple University Law School and works in Washington D.C.