Times-Shamrock rebrands, combining sayings from the past with messages for the future 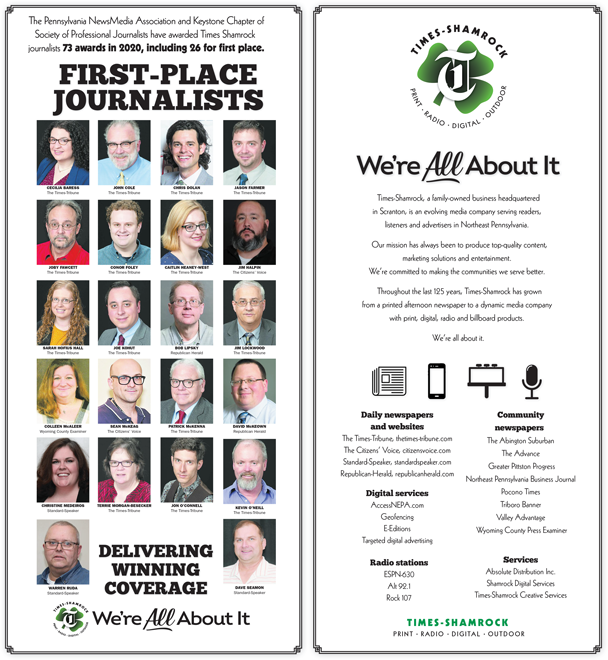 In the fourth quarter of 2019, Larry Holeva, executive editor of the Times-Tribune, oversaw a Times-Shamrock leadership group charged with developing a message that could be carried out across all types of media housed within the Times-Shamrock umbrella of companies.  Immediately, Holeva recognized the magnitude of the project. “I’m used to doing this for print, but this was so much bigger and more important,” said Holeva. “This message and campaign would span across billboards, radio, and TV ads, as well.”  With the measure of the project in mind, Holeva and the team decided to provide a clean and fresh foundation by redesigning the company’s logo and slogan.  The newly simplified and streamlined logo for Times-Shamrock would serve as a keystone for the project and its message.

Holeva and the team then began brainstorming the best language for properly representing all of the media company’s offerings.  A former colleague mentioned the old-time newspaper boy phrase, “Extra! Extra! Read all about it!,” in a meeting, and the group decided to use that iconic phrase as a starting point for the new project.  That is when Holeva and the team arrived upon a new phrase and the message for the campaign: We’re All About It.  Holeva said he thought the language perfectly described Times-Shamrock and the wide-array of services and packages the company provides to business partners, as well as the many types of media available to the community.  “We’re about covering urgent breaking news; helping you develop, grow and market your business; covering local sports; covering community events; covering community news – ALL of it.  We’re all about it.”

With a new logo and message in hand, Holeva and the team moved forward with the campaign promotion in the beginning of 2020.  While Holeva said the logo and slogan are used alone in some messaging, he stressed the importance to reiterate the phrase wherever and whenever possible, and across all media platforms.  For Mother’s Day, the Times-Tribune had a special section to honor local mothers with subscribers submitting pictures of their mothers and families.  Holeva reported that the company received and featured more than 800 photos of mothers and their families from the region, and the heading for the section read: Celebrating Moms, We’re All About It.  In addition to the phrase’s use in Times-Shamrock newspapers, the company is also using it on local radio where Holeva said the slogan is used during the weekly broadcasts of Friday night high school football.  Holeva noted the complementary relationship of the two media types, as each one pushes and pulls the reader or listener back and forth to the other.

Holeva said this is just a fraction of the total media coverage that he and the Times-Shamrock team are working to promote to current and potential advertising partners.  Holeva said the value of the news coverage paired with the visibility and traffic generated through the media network are invaluable.  He explained that Times-Shamrock had an unparalleled 1-2-3 punch, so to speak, for covering important or breaking news in the communities it serves.  The company would take breaking news coverage first to its billboards, with near-to-immediate changes available.  The news would then flow to the local radio stations, with both the billboard and radio directing individuals to the news website for more information.  The final piece would be full coverage in the following day’s newspaper.  “We can help you grow your business across these channels in a succinct, powerful way,” said Holeva, “And that is unique to Times-Shamrock in this market.”

Holeva said the campaign has been very well received by the public and Times-Shamrock advertising partners.  The company has adapted and redeveloped its marketing and sales materials to include the slogan as much as possible. It has also been pushed internally to staff with mousepads, ink pens and T-shirts that feature the new logo and phrase. Holeva has just passed the leadership baton to Mike Joyce from the Republican-Herald for the second phase of the campaign, which will include work from an 11-person team to develop a 14-month calendar of events and projects that will feature the new branding and deliver the message even further. Holeva noted that one of his favorite parts of the campaign so far has been the featuring of award-winning Times-Shamrock journalists with the phrase: Award Winning Journalism, We’re All About It. “I think it’s great that we’re highlighting our people – on all sides.”