The House of Representatives was in session this week. The Senate convened on December 18 to consider judicial nominations. The Senate confirmed Governor Tom Wolf’s nominations of Bruce Beemer, Wolf’s inspector general and a longtime prosecutor who served a stint as state attorney general in 2016, who will replace a retired judge on the Allegheny County Court. In addition, Drew Crompton, Senate President Pro Tempore Joe Scarnati’s chief counsel and chief of staff, will replace the retired Judge Robert Simpson on the Commonwealth Court, a statewide appellate court that typically hears disputes in which a government entity is a party. Both will serve until a successor is picked the 2021 election and sworn in to a 10-year term. 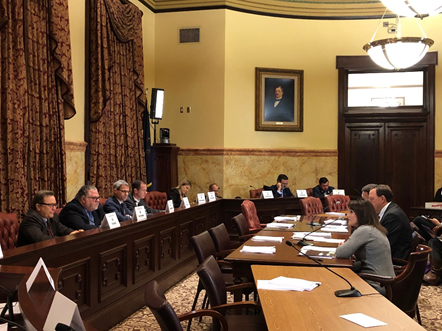 On December 16, the House Judiciary Committee held a hearing on House Bill 95 and Senate Bill 95, which adds a provision to Title 42 allowing for a swift motion to dismiss a SLAPP (Strategic Lawsuit Against Public Participation). Melissa Melewsky, PNA Media Law Counsel, testified on a panel with Michael Baughman, Pepper Hamilton LLC and Michael Berry, Ballard Spahr LLC (shown at right). View a joint op-ed featured in the Pittsburgh Post-Gazette.

The House also passed House Bill 1477, sponsored by Representative Sheryl Delozier, which amends Section 9124 of the Criminal History Record Information Act to delineate when a board, commission or department of the Commonwealth may deny the issuance or renewal of an occupational license as a result of a criminal conviction. This bill also moves to the Senate.

The House Commerce Committee voted out House Bill 2009, which creates a Cybersecurity Coordination Board, this week. PNA has proposed an amendment which subjects this Board to the Right to Know Law and Sunshine Act.