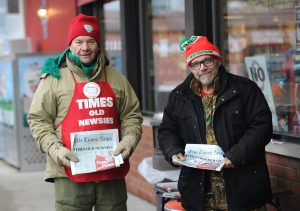 On the first Friday of every December, The Times Old Newsies, a group of more than 300 good-hearted volunteers from the community, give up a day of work to stand on street corners and in front of banks, stores and businesses of all kind to sell copies of a special holiday newspaper and collect money to buy food for families in need. This year, the newspaper printed an additional 19,000 copies that were wrapped in a special section for sale on the streets in the Erie market.

Since 1939, the majority of expenses for the organization has been covered by the Erie Times-News. This means that every single penny collected on sale day goes toward the purchase of boxes of food for the needy during the holidays – serving more than 2,400 families. Because the Times Old Newsies partner with the Second Harvest Food Bank, more than three times as much food can be purchased with the donations. Another team of volunteers gathers to pack the boxes, which are then delivered to needy families that have registered with various social service agencies.

The Times Old Newsies, which consist of male and female members, consistently raise $70,000 to $80,000 every year to help those in need during the holiday season. Since the start of the program back in 1939, when they initially collected $1,620.66, the Newsies have raised over $2.6 million dollars.