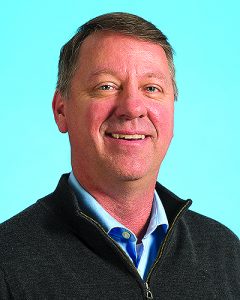 Before that, he spent almost 10 years in various capacities at the Corpus Christi (Texas) Caller-Times, including almost five years as the paper’s editor. He also was the managing director of the E.W. Scripps centralized copy/design desk, which housed production for seven Scripps papers and coordinated shared production for the chain’s 14 papers.

He currently serves as president of the Pennsylvania Associated Press Media Editors and sits on the boards for the New Jersey Press Association and the Pennsylvania Freedom of Information Coalition. Locally, he sits on the boards of directors for the Bucks County Opportunity Council, Bucks County Community College, Pennsbury Athletic Association and the Lower Bucks Chamber of Commerce. While in Texas, he was past president of the Texas Associated Press Managing Editors, a six-year board member of the Freedom of Information Foundation of Texas, an eight-year member of the Legislative Advisory Committee, which monitored media-related legislation, and is a First Amendment Institute graduate.

After graduating from the University of Colorado and a two-year stint at the Livingston (Montana) Enterprise, he spent 15 years in Denver at his hometown paper, the Rocky Mountain News, working his way mostly through sports and finished there in 2003 as the paper’s production director, overseeing the copy and design desk and Page 1.

In his current capacity, he won first place in column writing in the New Jersey Press Association awards and honorable mention in the Keystone Awards in Pennsylvania. He also led the Burlington County Times to its fifth, sixth and seventh consecutive General Excellence awards in the NJPA. Ten times his newsrooms in Texas, New Jersey and Pennsylvania have won that state’s top honor as best newspaper, including 2018 for the Courier Times, which also finished runner-up in the statewide awards, regardless of circulation.